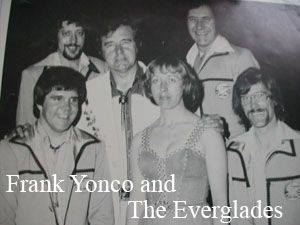 I had met Frank some months before and he offered me a place in his band if I ever decided to move to Cornwall. I took him up on his offer and became an ‘Everglade’ Frank was the complete Showman and along with wife Kit were the major Country Band in the southwest. We played the summer season in Cornwall and did short tours in the winter months. These tours included working with Johhny Bond (western singing star of stage & films with Tex Ritter & Roy Rogers) George Hamilton1V plus other Country Stars and venues ranged from the Oil rigs in the Orkneys to St Austell Theatre. The venues were wide and varied! I was with Franks band when we appeared on ‘New Faces’ and although we were beaten into second place by Lenny Henry, it was good to be in the TV studios again.

I enjoyed working with Frank and greatly admired his showmanship, but left the band as I wanted to ‘go in a different musical direction of Country music’